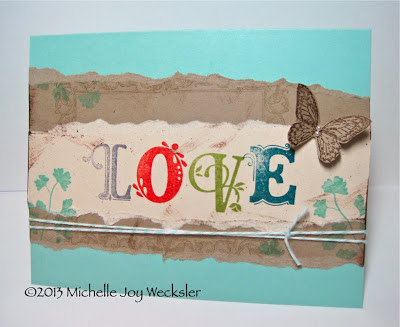 Today's Question From The Craft Room:  "However afraid we are of change, the question that we must ultimately answer is this:  What's the greater risk?  Letting go of what people think or letting go of how I feel, what I believe, and who I am?" - Brene Brown in The Gifts of Imperfection
I have been enjoying reading a few books by Brene Brown lately and laughed and cried when I watched her recorded Ted talks.  I am embedding both of her talks here...I thought you might enjoy them!


Today's card began with a Crumb Cake card base :)  Really, it did!  I kept stamping on that Crumb Cake card base until I felt I had a very ugly card!  Then, rather than start all over, I decided to tear apart the card front and use it as a panel on a Pool Party card base.  It's amazing how if you are willing to keep working through the creative process you might actually come up with something that makes you smile :)  I used Island Indigo, Pool Party, Calypso Coral, Wisteria Wonder, Lucky Limeade, Crumb Cake and Soft Suede ink along with images from Papaya Collage and Broadsheet Alphabet.  A piece of Pool Party baker's twine finished the card.  I hope you like it! :)  Wishing you a wonderfully creative and love-filled weekend!!!!!
Posted by Michelle Joy Wecksler at 12:00 AM 2 comments: 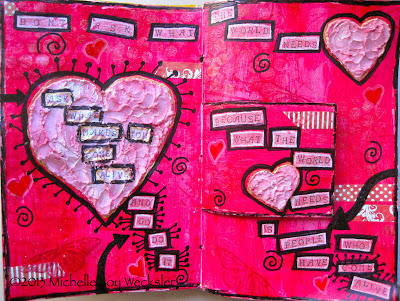 Today's Lesson From The Craft Room:  Sufficiency isn't an amount at all.  It is an experience, a context we generate, a declaration, a knowing that there is enough, and that we are enough.  Sufficiency resides inside of each of us, and we can call it forward.  It is a consciousness, an attention, an intentional choosing of the way we think about our circumstances. - Lynne Twist in The Soul of Money
Today and moving forward, I am working on my experience of sufficiency.

For today's post I decided to share art journal pages that I completed earlier this week.  I thought it was a good way to show you how you can incorporate your Stampin' Up! products into more than greeting cards :)  Can you figure out which products I used????  I used both current and retired stamps for the words and the background images (see the butterflies?).  I also incorporated some embossed tissue paper tape that I had made (check out the video here) - which required embossing powder, Versamark, and a heat tool!  See what other avenues you can explore with your Stampin' Up! products!  Here are a few more pics of the pages: 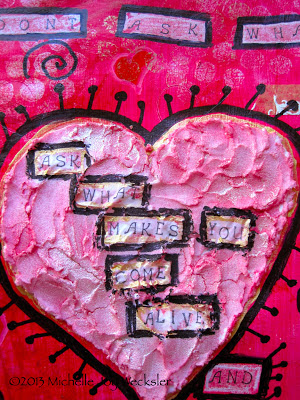 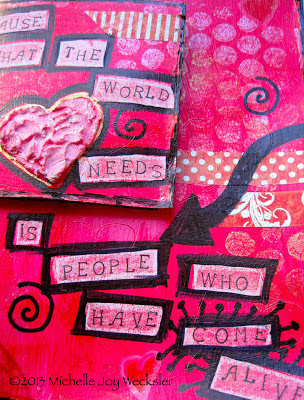 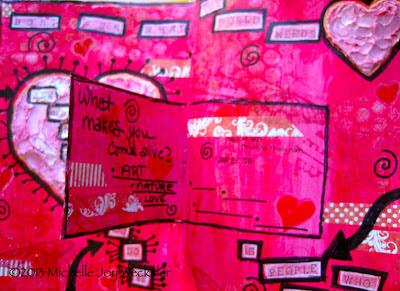 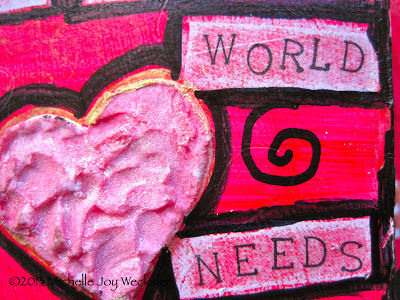 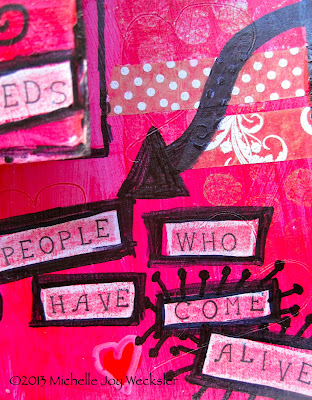 Out On A Whim Wednesday: Wire Bulletin Board 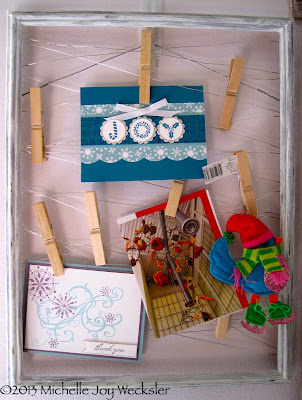 Today's Lesson From The Craft Room:  Upcycle :)
There are times when old (and ugly) frames can be found in our home.  Michael is an antique dealer so at times he may purchase something that comes in a frame, but it is what is on the inside of the frame that he is interested in.  So, the frames will make their way out to the garbage or recycle bin...unless I intervene :)  I had it in my mind that I wanted to try to make a bulletin board using wire, so I snatched a recent "doomed" picture frame and brought it into the craft room.  I began by lightly sanding the frame (it was a dark brown) and the painted the frame with gesso.  I had originally planned to use additional paint, but once the gesso dried, I loved the distressed look!  So, I just gave certain areas another light sand and decided to leave the gesso layer alone!  Next, I began hammering little nails into the back of the frame - all along the long sides - with the nails being about 2 inches apart.  I then took some wire (I'm not exactly sure what the gauge of the wire was, but it was not too thin and it was quite flexible) and I would the wire around one of the nails and then worked my way down the frame - wrapping on a nail and then crossing to the opposite side of the frame to wrap another nail - until I found my way to the bottom of the frame.  I then worked my way back up since I had skipped some nails along the way.  Since the frame already had a wire for hanging on the back, I decided to just leave that. 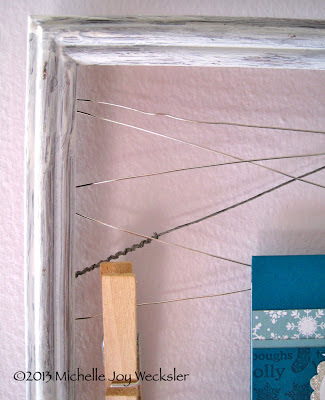 Of course, if you didn't want the hanging wire to show you could remove it and just add a sawtooth hanger at the top of the frame.  I used clothespins to hang items from the wires, but you can use wire hangers, mini clips, or even altered paper clips for hanging too!  I might have to decorate those clothespins...they are crying out for some color :)  What can you upcycle today????
Posted by Michelle Joy Wecksler at 12:00 AM 1 comment: 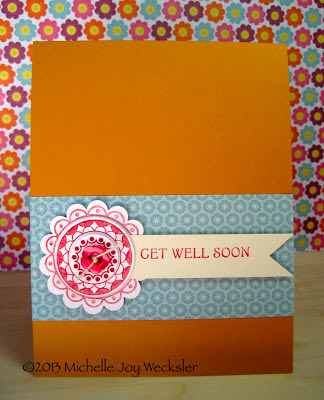 Today's Lesson From The Craft Room: If You Really Want To Hear You Have To Stop And Listen
There is one particular point in our morning walk where Buddy's pace begins to slow and finally he comes to an absolute stand still.  It is a place where we often see bunny rabbits (a favorite of his).  His innate hunting ability tells him that in order to find the rabbits he needs to come to a complete stop - stand motionless - and watch and listen.  Only then will he be able to find them.  Oh how my dog teaches me so much!  The same is true for our inner knowing.  We can't hear our inner wisdom if we are busying ourselves or distracting ourselves (yes, time on the couch in front of the tv is distraction and does not qualify as coming to a complete hault and sitting motionless).  We must come to a complete stop and be absolutely still and listen.  Only then will we be able to hear what we need to know.
Today's card is for my aunt who has been under the weather with a cold.  I began with a More Mustard card base and added a strip of Floral District designer series paper.  Next I stamped one of the images from Circle Circus with Primrose Petals ink.  I stamped the image multiple times and used a variety of circle and scallop circle punches to punch out the image so that I could then layer it with dimensionals.  Next I added a button with a bit of thread to the top of the image with a glue dot.  Finally, I stamped the sentiment from Thoughts & Prayers using Primrose Petals ink on Very Vanilla card stock.  I cut it out to look like a banner and added it to the card with dimensionals.  I hope you like it :)


Sale-A-Bration is an annual party with loads of free products!!!!  Spend $50 (not including tax and shipping) and choose one free Sale-A-Bration product for FREE!!!!  You receive one FREE Sale-A-Bration product for each $50 you spend (not including tax and shipping)!  It's a great time of year to stock up on your favorites/consumables or purchase some items off your wish list or the wish list of someone you love! :)  Click HERE to place your order now!!!!!  SALE-A-BRATION runs from January 22nd thru March 22nd.

Posted by Michelle Joy Wecksler at 12:00 AM No comments:

Just a reminder that Sale-a-bration starts tomorrow (January 22nd) and the Stampin Up! ordering system will be down between midnight and 2am Mountain Time.  So, if you are awake beginning at 2:01 a.m. Mountain Time tonight you can go ahead and place your Sale-a-bration order HERE! :)

Posted by Michelle Joy Wecksler at 6:49 PM No comments: 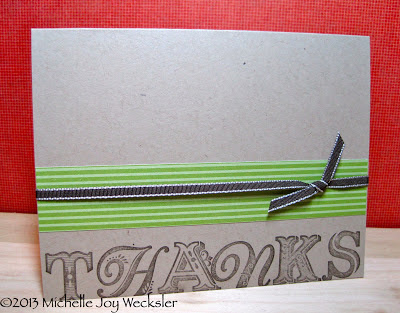 I will let today's quote from theologian Howard Thurman stand on its own as today's lesson :)
Today's card was inspired by the desire to place a graphic greeting on the bottom of the card.  With the help of my stamp-a-ma-jig, I stamped the Broadsheet Alphabet letters in Early Espresso ink on the bottom of the Crumb Cake card base.  A strip of In-Color pattern stack paper and a length of Early Espresso 1/8" taffeta ribbon finishes the look :)  I hope you like it!
Posted by Michelle Joy Wecksler at 12:00 AM No comments: