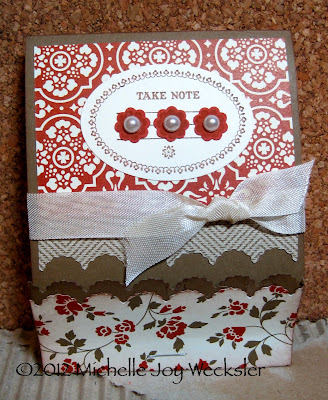 Today's Lesson From The Craft Room:  It Takes A Series Of Links To Make A Chain Of Events
A frantic call tonight from our neighbor - to please go over to her house to help her husband.  Michael grabbed some surgical pads we had from the vet and said something about the dogs being bit.  He just got back a few minutes ago and shared the story.  Our neighbor's dogs somehow got out of the house - there have been some workers doing some painting in the house, so that's the best guess as to how the dogs got out.  They are two small, older dogs - Buddy's best friends.  Somehow those two little dogs were put by someone into the fenced yard of a home a few doors down (even though they wear tags that have their address on them).  There is a large shephard that lives there - a dog they had never met.  When our friend's husband arrived home a neighbor said, "I think your dogs are next door at the next neighbor's house.  Did you know they were there?"  Our friend immediately ran over to that fenced-in yard and opened the gate.  His two dogs ran out and when he got a close look at them they both had multiple bite wounds covering their small bodies.  The good news is that right now they seem like they are going to be okay - although they are pretty shaken up.  They were already on antibiotics from a recent teeth cleaning so that is also good news.  As we are sitting here reflecting on how this all happened we began to string together all of the points in the series of events - all of the "links" where something different could have happened, but didn't.  How this particular chain of events might have been different if different actions were taken or omitted.  It is how everything happens in this world - a series of links in a chain.  I walk away from this series of events hoping that I will think about the impact my link might have on a series.  To think about what assumptions I am making and to test those assumptions.  It's easy to resort to trying to find blame - to try to figure out who is at fault for what happened today.  And yet it is not one link that made up this chain - is was a series.  In some way, we all have responsibility for what we did and did not do.  I sit here wondering why I didn't get the urge to take Buddy for an extra walk today - maybe we would have seen or heard something that could have made a difference.  I just hope Buddy's friend and the shepherd are all okay and that all of us humans learn something from the chain.
Today's Friday Folds project is a holder for a pad of Post-It notes!  I found the instructions at SCS here and did a little improvising :)  I used Soft Suede card stock along with Comfort Cafe designer series paper.  The "take note" is from Notably Ornate (retired).  What a cute way to store your sticky notes :)  Here are a few more photos: 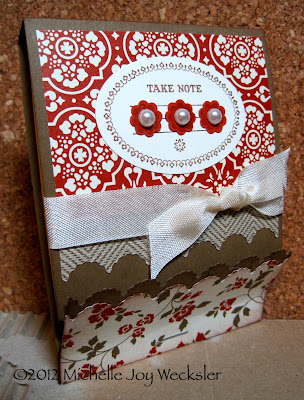 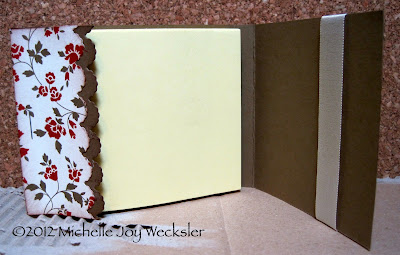 Posted by Michelle Joy Wecksler at 12:00 AM No comments: 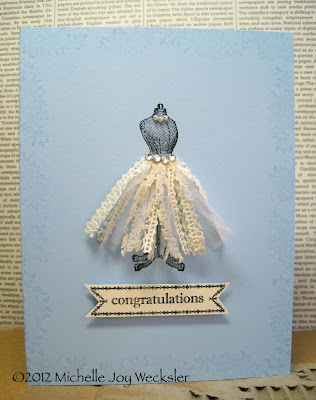 Today's Lesson From The Craft Room: I've Been Known To Cry At Museums
Art museums impact me in so many different ways.  When I was at the Milwaukee art museum a few weeks ago, I found myself near tears multiple times.  The tears would threaten to escape the confines of my eye lids when I saw folk art and art by self-taught artists.  I was overwhelmed by seeing that people will create with whatever they can in an effort to satisfy the need to create.  I was also near tears when I would read of an artist dying at the age of 31 - so young, with so much art yet to create.  Part of my tears are also about me.  I wonder what lengths I am willing to go to to create art.  I wonder if I will die with my art inside of me, or if I will commit each and every day to doing what I can to bring my art into the world.  Yes, I've been known to cry at museums.
Today's card began with a Bashful Blue card base and the dress form stamp from Established Elegance.  I then cut up thin strips of Victoria crochet trim and some organza fabric and adhered them to the dress form using Crystal Effects.  Once the Crystal Effects dried I added the adhesive rhinestones and the pearls.  The sentiment from Itty Bitty Banners was stamped onto Very Vanilla card stock, cut out and adhered to the card with dimensionals.  Finally, I used Versamark ink and stamped the floral image from Established Elegance around the perimeter of the card.  I hope you like it!
Posted by Michelle Joy Wecksler at 12:00 AM 1 comment:

Out On A Whim Wednesday: Chaos & Care

Today's Lesson From The Craft Room:  If You Pull The Thread, The Knitting Will Unravel
It began with a new paper organizer.  So innocent - that cardboard sorter to place my card stock.  But somehow that one innocent organizer created major chaos in the craft room.  After all, once the card stock looked so good it made other things look like such a wreck!  So then it started - I pulled on the thread a little more - unraveling another area of the craft room...then another...until...total chaos!  There is not a stitch of creating that can be done in that room right now...although the unraveling has almost finished :)  Throw into the mix an unexpected trip to the vet with Buddy yesterday due to a puncture wound on his back right hind leg and now you have Chaos & Care for the day :)  I will be back tomorrow - hopefully with a few different "C" words - calm, content, and crafting!!!!  I hope you have a beautiful day!!!!!  Remember, if you pull the thread, the knitting will unravel...and sometimes that's a very good thing :)
Posted by Michelle Joy Wecksler at 6:59 AM 1 comment:

For this week's Two Ways Tuesday I took out my Bigz Typeset Alphabet dies for the Big Shot. 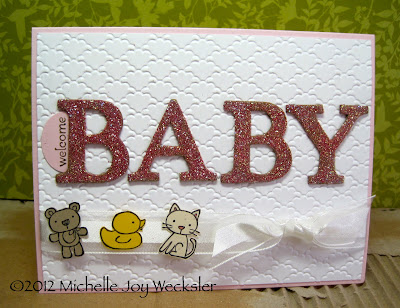 I LOVE the Bigz dies because you can die cut so many materials with them.  Here I chose to die cut chipboard to create this baby card.  I die cut the letters from chipboard and then used Heat & Stick powder to adhere some Dazzling Diamonds glitter that I had colored with Rose Red ink.  The Whisper White card stock was run through the Big Shot with the Fancy Fan embossing folder.  The animals from Every Little Bit were stamped and cut out and adhered to the organza ribbon with mini glue dots.  The "welcome" is from Petite Pairs. 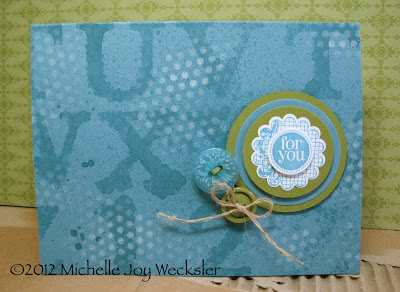 Chipboard isn't the only thing you can die cut with the Typeset Alphabet Bigz dies!  To create this card I decided to make a stencil from the die by die cutting a piece of blue stencil film.  If you want to make a disposable stencil, you can choose to die cut scrap card stock or paper.  Here is a picture of the die cut film: 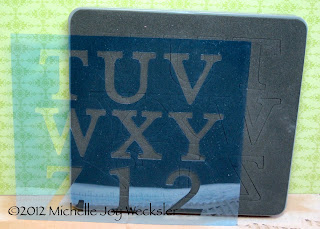 What's nice about this particular die in the set is that none of the letters have "centers" that get cut out, so all of the numbers and letters maintain their intended shape.  (If you die cut one of the other dies - for example, one that has the letter "B," the centers also get die cut so you will just get an outline of the outside of the letter and it will be a little less "defined").  I then placed the stencil on top of a Marina Mist piece of card stock and sprayed it with a mix of water and Baja Breeze ink in a spray bottle.  I then moved the stencil over and sprayed again.  Next I sprayed the card randomly with the same ink and used my heat tool to speed the drying process.  I then took a piece of drywall tape that has tons of little circles cut out of it and used that as a stencil with Whisper White craft ink.  The sentiment is from the Mixed Medley set.
I hope you've enjoyed this week's Two Ways Tuesday!  I hope it inspires you to use your Typeset Alphabet Bigz dies (or other Bigz dies) in new and fun ways!!!!
Posted by Michelle Joy Wecksler at 12:00 AM 1 comment: 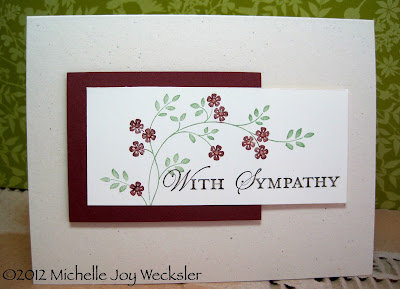 Today's Lesson From The Craft Room: Give Yourself Permission To Wake Up
For the last few days I have woken up at hours that I would consider to be early.  I lay there in bed trying to coax myself to go back to sleep - telling myself it is too early to wake up.  I have found that I enjoy 8 hours of sleep and if I wake up prior to getting my full 8 hours I feel like I need to stay in bed until the 8 hours have passed.  Well, the last few days I decided there was no reason to just sit there in bed waiting to see if I might fall back asleep.  I was awake so I gave myself permission to go with it and get out of bed.  I enjoyed the earlier hour - quieter streets, watching the sun come up and lighten the day little by little.  When was the last time you gave yourself permission to wake up?
For today's card I chose to use the floral image from Thoughts & Prayers.  I colored the stamp with a Wild Wasabi and a Bravo Burgundy marker and stamped it onto Very Vanilla card stock.  I then stamped the sentiment from Loving Thoughts using Early Espresso ink (and my stamp-a-ma-jig).  I adhered the panel to a piece of Bravo Burgundy card stock before adhering the entire piece to a Naturals Ivory card base.  For a final touch, I added some Dazzling Details to the flower centers and stamped the envelope with the same floral image.  This card is for one of my mom's friends.  Her friend is 98 years old and just lost her daughter (who was 70) to cancer :(  I hope the card brings her a moment of peace in the midst of her grief.  It was made with lots of love and care.
Posted by Michelle Joy Wecksler at 12:00 AM 1 comment: